Daisy Harper a 9 year old Patterdale Terrier decided to pick a fight with a badger and was seen out of hours at our Kingsnorth branch in Ashford at the end of February.

Our vet Yohann who was on duty at the time, stabilised her for shock and treated her injuries which included severe trauma to her chin and eye.

Daisy’s treatment was continued at her usual branch, Tenterden and her wound was initially cleaned and sutured but unfortunately the wound was severely contaminated and broke down. All the dead tissue had to be trimmed off leaving a large open wound on her chin. We started applying daily dressings to allow some nice healthy tissue and skin to develop with a plan that a skin graft may be required at a later date once the infection was under control.

Daisy initially was sedated for her dressing changes as it was so painful, but after a few days Daisy began to feel a little better and would allow us to change her dressings without sedation.

Daisy would come to see us at Tenterden very cheerfully and as with time, she improved and felt better in herself, her barking to greet us became louder! Gradually her daily visits became weekly and we finally discharged Daisy on the 20th April without having to perform skin grafts as she had healed so well. Daisy, her owners and everyone at Tenterden were very happy and relieved especially as she no longer has to wear a Buster Collar! 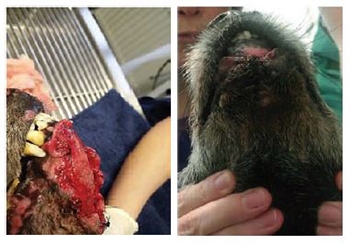