Meet Brian a lovely 10 month old English Bull Terrier Cross. His owners, the Talbots rehomed him a few weeks ago from Coventry. After having him for a week they booked him in with us to have him castrated.

Surgery was routine but on recovery some vessels in his skin wouldn't stop bleeding. As he had come from his previous home without any history of being treated for fleas and worms we had a suspicion that he may have Lungworm. The Talbots had also reported that he had coughed a few times since they had rescued him. The test came back positive.

Lungworm (Angiostrongylus Vasorum) is a parasite that your dog can pick up from carriers such as snails or slugs, or from toys or bowls which have been left outside. 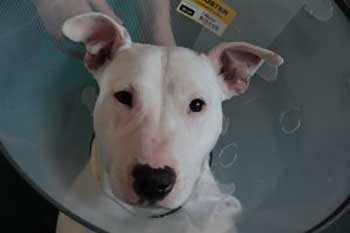 Lungworm can cause a variety of symptoms including:
coughing
wheezing
reluctance to exercise and lethargy
blood clotting problems and seizures

Dogs may have one or a combination of these symptoms. 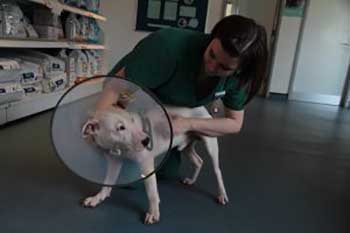 Luckily we caught the Lungworm symptoms early and we were able to treat Brian with Advocate spot on and Panacur worming treatment. We also applied a cold compress and pressure bandage to his surgical site to help with the clotting. Brian was a perfect patient and especially enjoyed all the extra hugs from the nurses during his treatment. He stayed with us overnight and went home the next day to his relieved owners who will carry on with his treatment at home. Brian is expected to make a full recovery.

We have also diagnosed another case of Lungworm in the practice this week, though in this case the symptoms are more severe and the dog is very sick.

Lungworm is easily treated by using Advocate which is a monthly spot on treatment which also treats fleas, ear mites, many other worms and sarcoptic mange.